“I’m not a scientist. I don’t have a PhD, but I am an insatiably curious person…. Everytime I wear my Oura Ring, I feel like I get access to secret knowledge that’s completely unique to me.”

Shara is a former dance choreographer turned inventor making contributions in science and femtech with data from her own body. After 80+ hormone cycles of quantified-self study she discovered a pattern between her hormones and her creative behavior. That’s when she decided to design MUSE.CYCLES, a fertility awareness method grounded in brain and behavior science that predicts when in your cycle you are most likely to spark insight, flow, and eureka moments. With MUSE.CYCLES, women are empowered to better understand their hormone patterns and take advantage of moments in their cycle where their creativity can truly be harnessed. And wearables like Oura help Shara collect research from the number 1 expert: her body.

“I’ve always been very aware of my body in an intuitive sense. So when tools came out that allowed me to see the invisible in myself for the very first time, it took my curiosity to a whole other level.”

During the holiday season in 2016, Shara teamed up with a close friend who specializes in behavioral neuroscience to scout through dozens of papers covering the latest neuroscientific evidence, looking for support for her personal observations on the relationship between her hormone cycles and creativity. That morning, her home looked like a detective’s office wall pinboard, but, as Shara explains:

“What a gift! After all, I could have been wrong. So it was thrilling to see for the very first time that my personal observations and the latest neuroscience on ovarian cycles were in sync! That’s the day MUSE.CYCLES was officially born. MUSE.CYCLES, is very similar to the idea behind sleep cycle tech that monitors and senses sleep cycle stages. But it’s specifically designed for the female biological rhythm, the ovarian cycle. Just like in the sleep cycle, when the brain goes through stages of light, deep and rem sleep, in the ovarian cycle, the brain also goes through a series of patterned changes. No one had ever fully mapped out these patterned brain changes before.”

Below is a photo Shara took on Christmas morning 2016.

Shara’s road to self-knowledge led her to the stage, as she was able to present her personal findings and experiences at the 2018 Quantified Self Conference.

That was the turning point. Shara was empowered and moved from her “personal practice” to becoming an inventor and active member of the quantified self movement.

“When I shared my work, the response was so great that it gave me the courage to present it to neuroscientists like Dr. Shelly Carson at Harvard and collaborate with the Kriegsfeld behavioral neuroendocrinology lab at UC Berkeley. Creating an invention and designing boutique body awareness programs was a way I could get this extraordinary pattern I felt into the hands of other women so they could feel it too. Before MUSE.CYCLES the systematic and empirical collection of data on hormone patterns and the creative brain had never been done before. The pattern was so phenomenal and so novel that I became an inventor out of necessity so I could better sync with it myself.”

Shara has now been using Oura since 2018, and, being a firm believer in the idea that anyone can make a contribution to science, it’s taken her initial research to the next level.

To Shara, Oura is an indispensable tool that empowers and focuses her research and creation.

While others may be alarmed or concerned over large awake times in their sleep data, that’s what Shara loves to see. When she looks back at her data and finds awake times at 4am, she’s actually seeing the inception of a brilliant idea or the origins of a new project.

“Oura has helped me look deeper into the relationship between my sleep and creative process. When I’m up all night, or wake up during the night, caught in a creative flurry, it’s very interesting to see how there is a repeated pattern of creative inspiration and sleep disruption during peak fertility.  When the muse strikes,I need to capture the moment or I risk losing the work.” 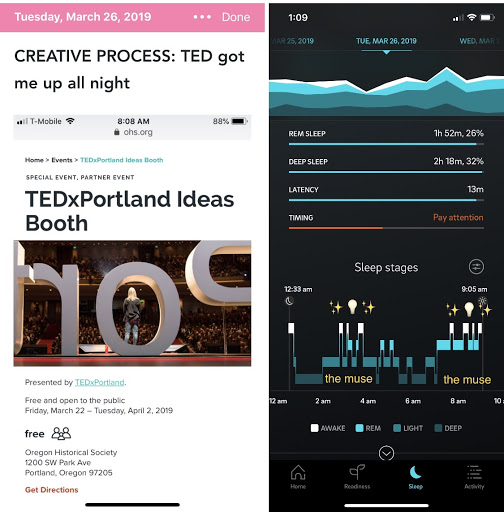 In her “muse” gaps above, she found inspiration, and used that time to her advantage. This specific “creative flurry” resulted in her idea for her TEDx Ideas Booth audition, so she got started.

“What’s great about Oura is that the recurring pattern I see creates a positive data story around something that could potentially be perceived as a concern. It’s really powerful when you know yourself so well.”

That’s what makes Oura so essential to Shara’s process. It cuts out the noise and creates a two-way dialogue between her and her body, while empowering her to put her trust in herself.

“I don’t know why but I see a tendency in people to trust the program, the coach, or the guru.  It’s powerful when you can listen to your body and know ‘This is what’s right for me’ and then have the data to back what you feel up. But it’s hard for people to wire out of ‘the shoulds’ like this ‘should’ be my pattern, I ‘should’ get more REM sleep. I don’t worry too much about ‘the shoulds.’ I just play with it. That way, it makes cycle tracking much more fun and much more interesting. ”

Shara always bets on herself, and her Oura patterns empower her to continue her research and keep working on achieving her biggest dreams like getting on the TEDx stage. 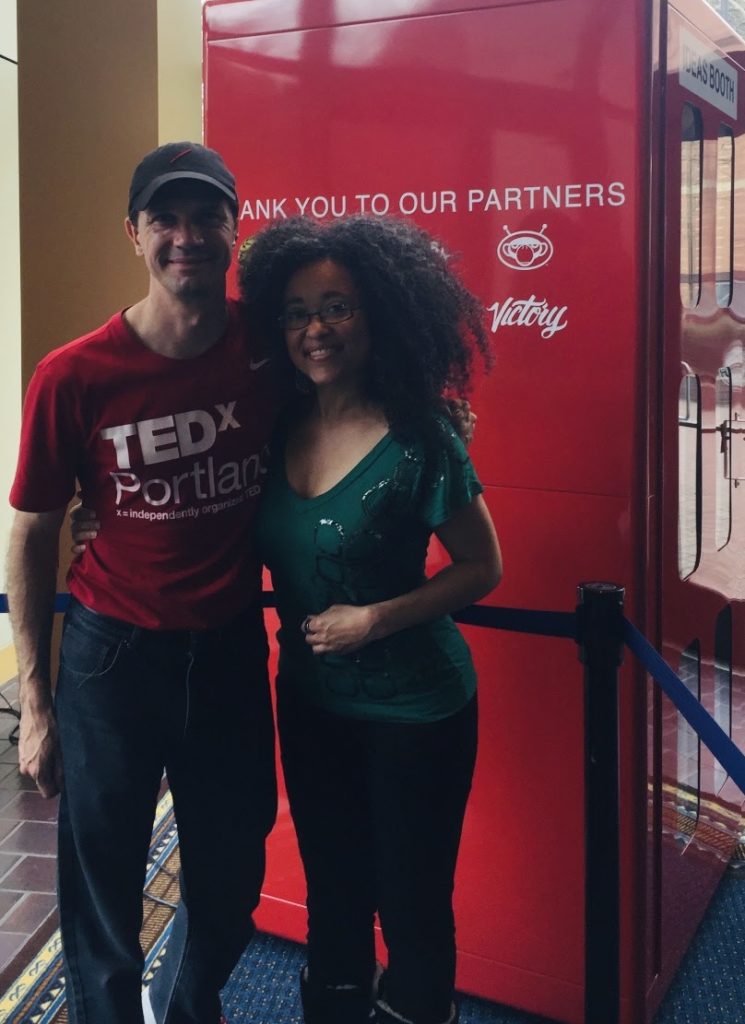 How YOU Can Make Scientific Contributions

“Science, art, and mathematics are a natural function of how humans think and have thought since the birth of culture. Even mammals do math! So the systemic STEM issue is really strange to me when, actually, anyone should be able to contribute to science, art and mathematics.

It’s a big story that someone like me, without any formal training, can make a contribution in STEM and become an inventor. With these devices, I can use my own body’s data to discover something about the natural world that has never been revealed before…”

Each day, Shara turns to wearables, like her Oura Ring, to stay in the know. With her passion for self-knowledge and a now consistent stream of biofeedback, she is able to supercharge her fertility awareness research.

“When I got an iPhone and a book called Taking Charge of Your Fertility, for the first time, I had a pattern to follow and the tech to track it which supercharged my attention. And now with wearable like Oura, it’s a new level of insight. Before this it was just ‘Oh I have a period, and I’m cycling, and all the feelings!’ After this, I now know exactly what’s going on with my body and my cycle. Attention on the right patterns is like putting yourself under the microscope. Or learning how to turn on your inner x-ray vision.”

Shara didn’t come from a formal science background with years of training, but with interest, passion, creativity, and wearables like Oura she’s been able to have a significant impact with her research, and one last thing to take away from Shara’s story is: You can too.

Some Tips From Shara

“Here are my tips on how I openly welcome all the variability in my patterns so that I can see more of the beauty of my experience:”

Everyone’s story is unique. Share yours with the Oura Community, or just give the Oura Team an update of where you are in your health journey!

Get Health Insights Straight To Your Inbox

Sign up for free today, and receive the latest articles, tips, and offers from Oura

Address has been subscribed successfully

Cookies help us deliver the best experience on our site. By using our site, you agree to the use of cookies.